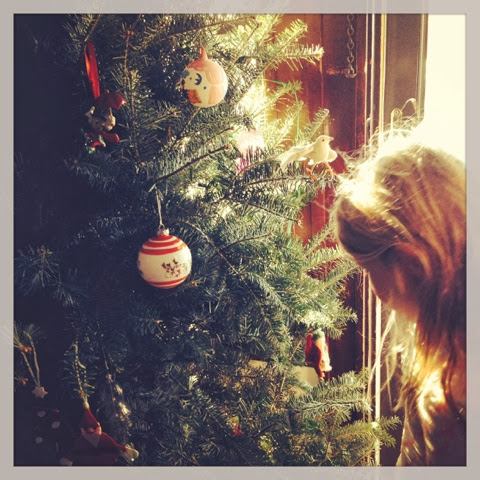 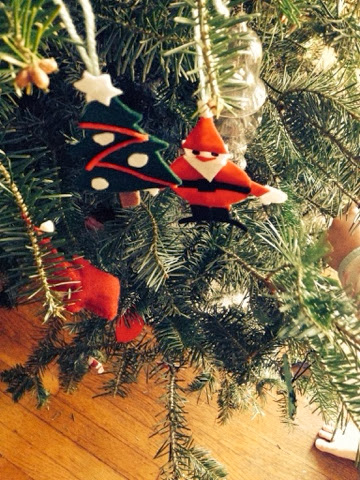 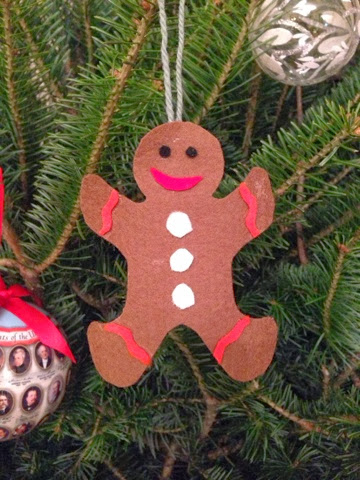 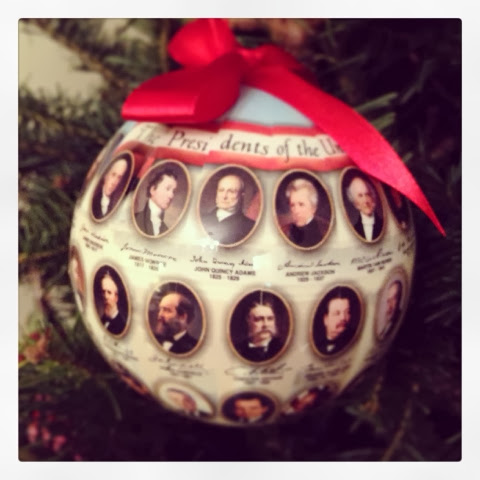 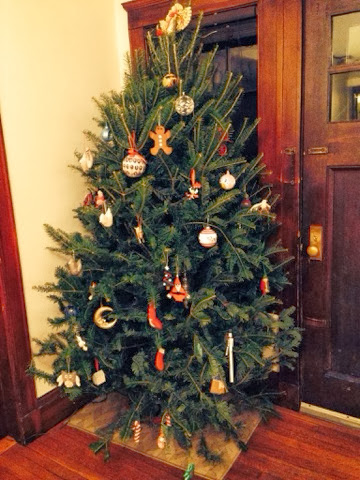 It's a very different Christmas this year. I have so been looking forward to a white Christmas, and indeed we have snow on the ground and rosy cheeks on the girls. It is lovely. But I had thought that all the time I am spending not working would be available for creating instead.  Of course it hasn't turned out like that. Our trip to the South West took two weeks and we are in New York for the week leading up to Christmas. Back in Boston the weather and lack of a car means it's pretty easy to spend a whole day doing something like buying snow boots for the kids (3 trains each way, a stop for lunch and donuts and it's dinner time upon our return.) I also came here without any kit at all. I've bought scissors, needles and thread as well as some felt and fabric, but with no sewing machine and no permanent work space it is less likely I'll spend the evening sewing as I usually do. So my dream of a tree entirely decorated in hand made ornaments has not been realised. We did spend a snowy Tuesday making felt decorations - you can see the girls efforts above. We've also bought a few decorations as souvenirs, like the American Presidents one above (which I adore),  and our landlord kindly invited us to use some of her decorations, which we found in the basement.  I'm not fussed about the lack of handmade, nor the variance of reality from expectation. I thought somehow in the absence of a long work day I'd be incredibly productive, but actually  I am realising the truth of that saying 'if you want something done, give it to a busy person'. Busy-ness begets efficiency, at least for me. Plus I use sewing as a meditative wind-down from work. In the absence of any stress beyond the perennial search for 'restrooms' that travelling with four young girls invariably entails, I don't seem to have quite the same need to craft. I still want to sew but the need to get a finished object out of it has diminished somewhat. Isn't that curious? Perhaps this is a bit of justification and I have merely fallen into laziness. It's certainly true that I'm falling back into sleeping patterns unknown to me since before children - going to bed in the early hours of the morning, getting up after 9.
Whatever the reason, our tree is unadorned by a single object I've made and, regardless, delights me. It's a fir tree and the look and smell is different from whatever we get at home (pine? I've never    really known).
Posted by Julie