After the success of the quilting project with Nina's class, I decided to give it a whirl with Ruby's class. 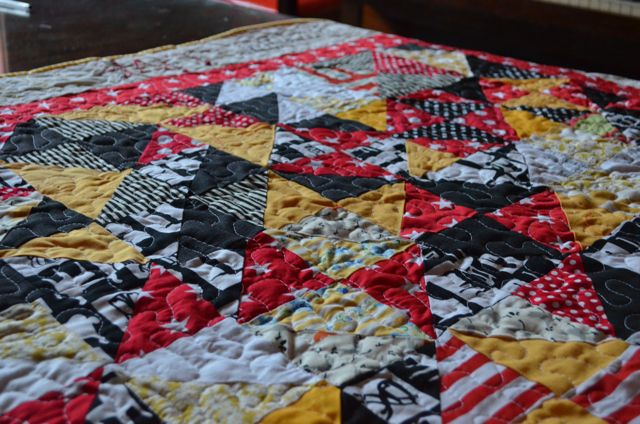 She is in a 3 and 4 class and she was initially concerned that the grade 4 boys might not be too keen on sewing. Her class teacher on the other hand, was extremely enthusiastic. 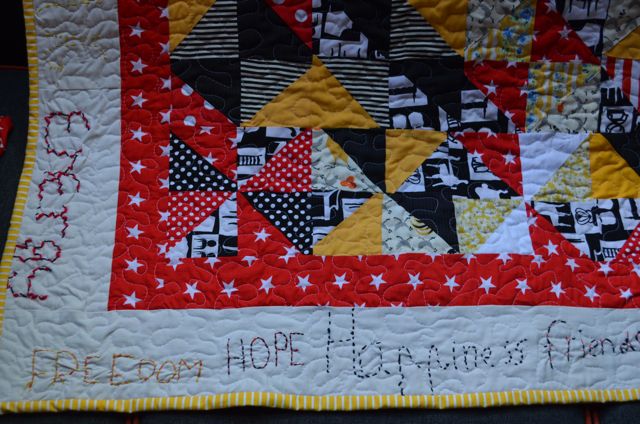 I decided to limit the colour range to just yellow, red, black and white, and hunted out all my fabrics in these colours. The kids selected the four fabrics they thought worked together to make their blocks. The piecing was all done by the kids using my machine. As ever, I found that even the most recalcitrant sewer perks up when it comes to using the sewing machine. 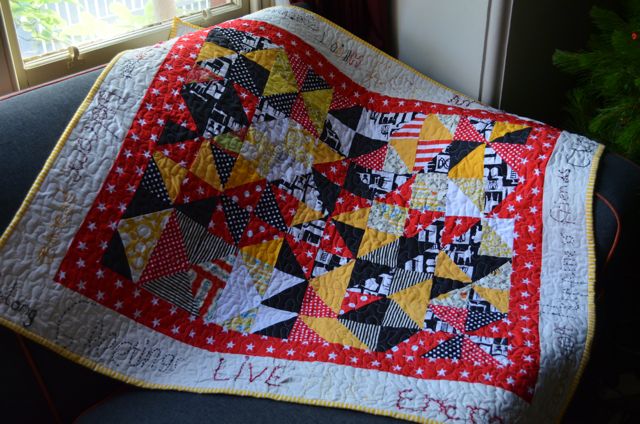 The class have been doing tessellated patterns. The teacher was interested in working with triangles and squares and fitting them together. Each block has four squares, consisting of two triangles in each square. As they starting working on their squares, I could tell that this quilt would come together beautifully.
They also chose a word to embroider, to make the border. The quilt will stay in the class even when the children move on, so the word was intended to represent something they felt they wanted to pass on to those children coming after. I did have to talk a few kids out of choices like 'fart' and many children really really really wanted their word to be their favourite animal, but in the end I thought most of the words were great: Friendship; Welcome; Energy; Live; Share; Peace; Belong; Fun; Hi; Greetings; Hope; Happiness; Joy; Hug; Together; Respect; United; Friends; Cute. 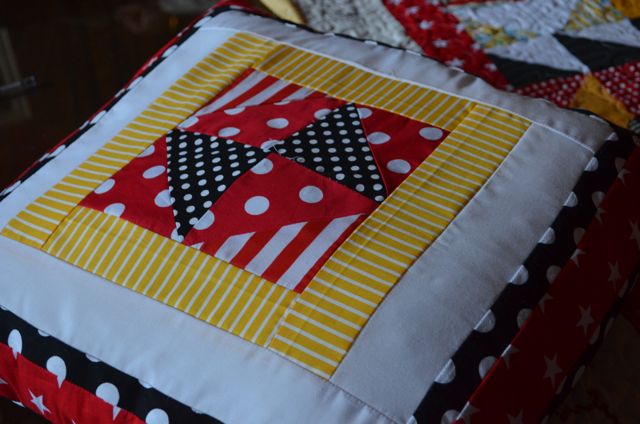 There are twenty kids in the class and their teacher did a block as well, which didn't make it into the quilt; 21 being a much more difficult number to piece than 20, so I made the final block into a cushion to go with the quilt. It was made up to fit a cushion insert I had in the cupboard.

Once again most of this project was made from my stash, though I did buy some fabric for the backing and the binding. As always the best bit for me was getting to know Ruby's class mates a little bit, and seeing the very different ways different children approach the same task. Even things like tracing the template lines onto fabric, pinning the squares together and cutting out the fabric presented real challenges to some kids. I am becoming more and more convinced of the importance of handwork, especially now that there is so much focus on digital dexterity that it is perhaps easy to lose basic skills like cutting and tracing. It was such a pleasure to spend my Friday afternoons in the company of these bright, interested children, listening in on their conversations, observing their small kindnesses to Lily, who accompanied me each week, and, at the end of it all, putting the pieces together to give them a quilt they can be proud of.
Posted by Julie