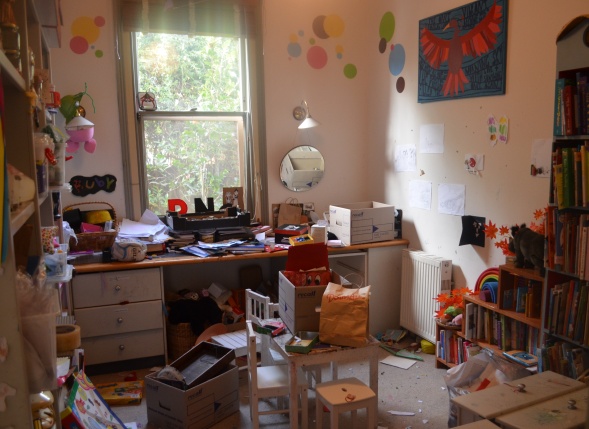 On any given day, our 'playroom' looks like this. This is particularly bad, because I'm in the process of packing it all up, but it doesn't take much for it to descend into madness. And since we moved here nearly six years ago, it has been the bane of my life, the albatross around my neck, and other cliches I can't think of right now. I thought that a playroom would be fantastic and keep the rest of the house from looking like a child care centre. I thought I would just close the door and ignore the mess. I thought we would have a place for everything and everything in it's place even though I am really not that sort of person. But the reality has been that, even for a good sized room, we just have FAR TOO MUCH STUFF. Part of the problem is that Christmas and birthday presents for four children each year from our large extended families and generous friends inevitably results in lots of things. And partly it's because the girls make and draw so many things and saving even only the smallest representative sample still amounts to a box a year, with no end in sight. 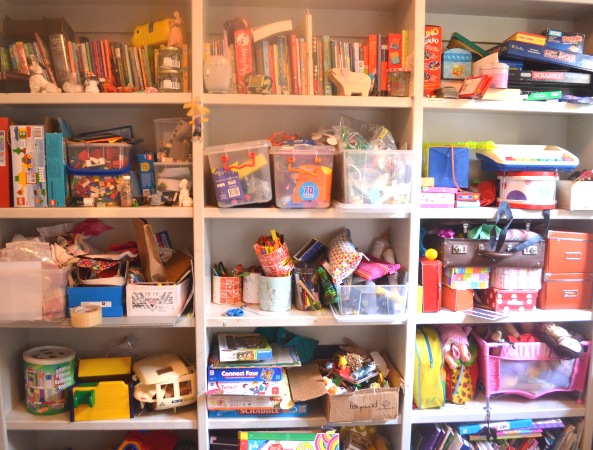 For as long as we have been here, I have snuck into the playroom at nights and secretly disposed of things, sometimes into the bin, sometimes to the local op shop, or the school fete, sometimes to friends.  And still, after every cull, the STUFF regroups, stronger than ever.

Eventually this playroom will become a bedroom and we won't want these big built in book shelves and the wall to wall desk that the previous occupants installed when they converted it into a study. We have decided to replace the stained and worn carpet in the two bedrooms and decided to do this room too. So we have ripped out the fixtures, to carpet and paint it properly, and will finally have room for the lovely Wilkens and Kent bookshelf that has been living in our shed. Craig had it custom made back in the days before me, and well before kids, to house his vinyl collection, so the shelves are well spaced and should suit the art supplies.  But it is much smaller, and hence, a massive cull is required.

The best thing, by far, about going through everything, was being able to get rid of the books I've always hated.  Goodbye all Mr Men books. We've still got stacks of books, and amongst them are some that I'll never be able to toss out. 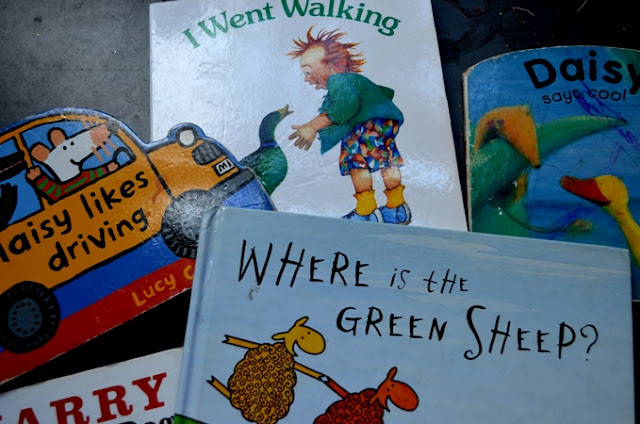 Maisie Likes Driving - far from a classic, but even now I could recite it by heart.  How hard I worked to get Ruby to identify the noise for each vehicle, how proud I was when she could do the 'rattle squeak' for the tricycle.  Poor first child, you never worry about subsequent children learning to make vehicle sounds, do you?

Where is the Green Sheep  - a modern classic, I still like the anticipation of that final page 'turn the page quietly, lets take a peek....'.  Grace used to say 'beep' for 'sheep' which was unbearably cute.

Daisy says Coo - the very first book I was given, at my very first mother's group session, by our local library, in a calico library bag.  We visited that library every Monday for at least five years I reckon.

I Went Walking - My sister gave Lily this for her first birthday.  I love Julie Vivas' illustrations in every book she does, but this is especially delightful and Lily loved figuring out which item of clothing the child had discarded on each page.

'Harry the Dirty Dog' - a favourite of mine as a child and Lil's number one for at least a year - she had 'Arry' on her birthday cake when she turned two. 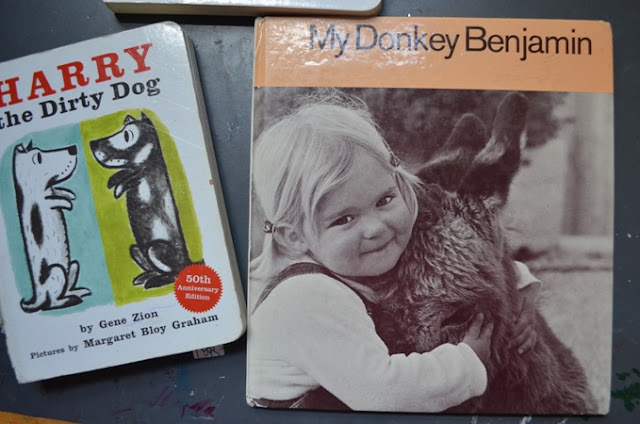 My Donkey Benjamin - We had this as kids and loved it and one of my sisters found it in an op shop for me. The little girl, Suzi's resemblance to Grace has not gone unnoticed by Grace..... 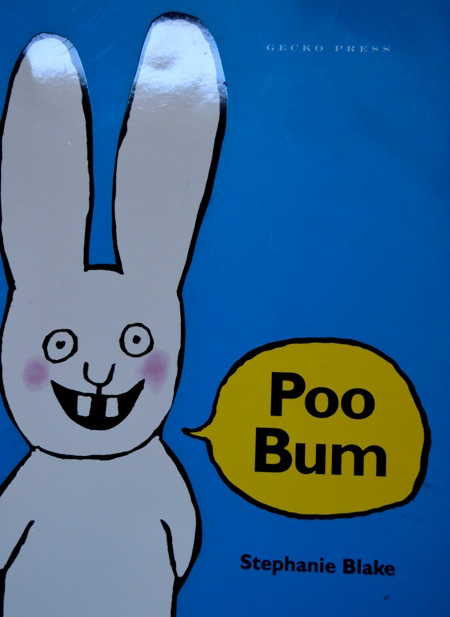 Poo Bum - do you know this? If you have a four or five year old, this will be the greatest piece of literature you could possibly read them. 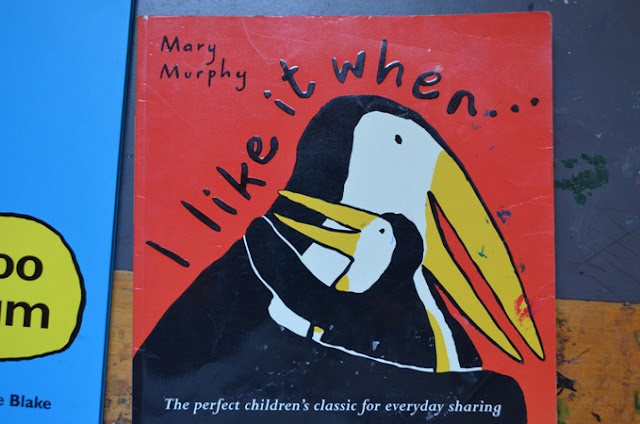 I Like it When - friends gave us this and all my children have loved it. The fact that the author shares a name with my sister is also kind of cool. 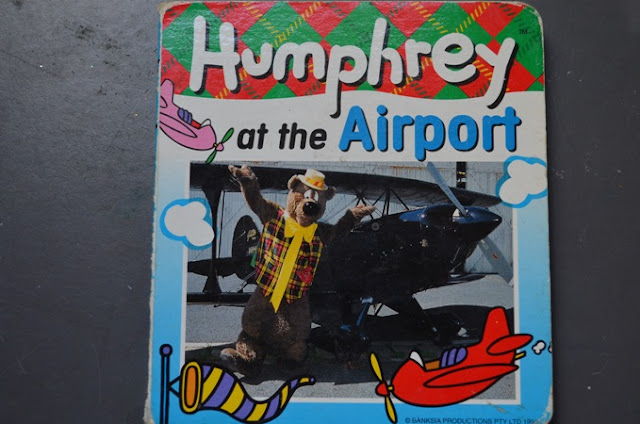 Humphrey at the Airport - so bad it's a masterpiece, this is one of those bizarre 'lets take a popular children's TV character and made a completely nonsensical book with terrible production values and zero story' kinds of books. 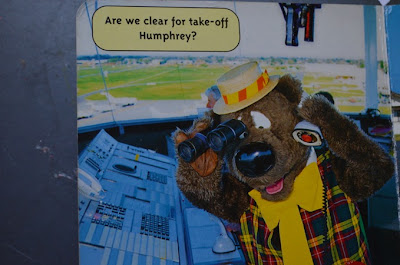 'Are we clear for take-off Humphrey?'  It's going to be hard to know, because Humphrey famously CANNOT TALK. 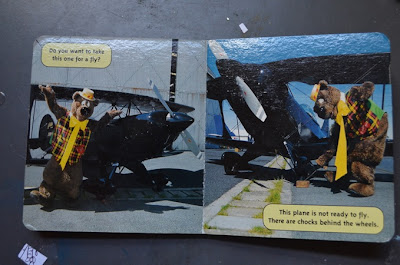 'This plane is not ready to fly.  There are chocks behind the wheels.'
Just what all children ought to learn about in a quasi educational book about airports.  What sort of two bit operation are they running at this airport? 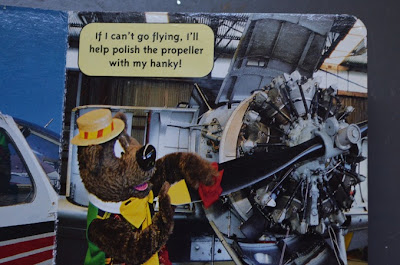 Humphrey discovers that he is too fat to fit into the cockpit. 'If I can't go flying, I'll help polish the propeller with my hanky'.
That is the denoument of the book, it's final scene.  Very helpful Humphrey, possibly distributing all sorts of bear grime onto a vital element of aviation equipment.  One can't help but think that the people making this book hadn't thought much beyond, 'lets take Humphrey to the airport and get a bunch of photos and figure it out from there'.   It is genius and I am keeping it for my grandchildren.

What are the books you'll never part with?
Posted by Julie