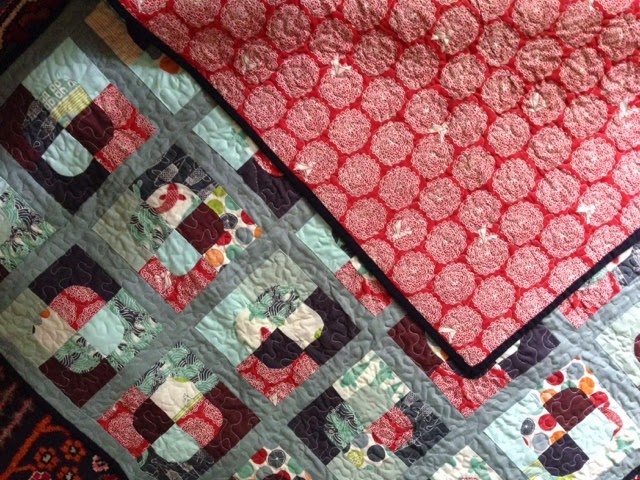 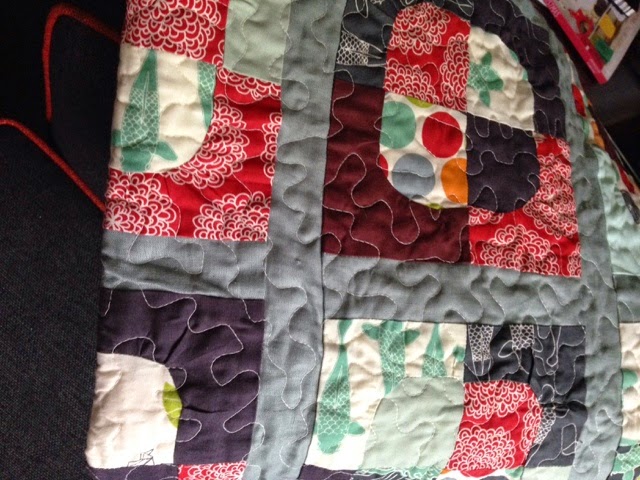 In our revamped dining/sewing room I finally found the time and space to finish this drunkard's path quilt. I made the blocks back in June, and did nothing with them for the next six months. As is the way with these things, it all came together pretty quickly once I finally took them out again. I'm happy but not thrilled with this one. The blocks were time consuming to make, mostly because I am no great shakes at sewing curves, and they were more complicated than the blocks in any other quilt I'd made (Which isn't saying a lot, my quilts are generally very simple). I love the fabrics in this, but I'm not sure I really showcased them well. I was very unsure of what to use for sashing. I nearly went with something much brighter - even orange - which made it a more arresting quilt, but eventually decided on this rather reserved grey. I had in mind a charcoally binding and indeed the fabric I bought was called 'Coal' but when I got it home it turned out to be a bluey-black, more than a grey, and I'm not entirely convinced. In addition to which I made a complete hash of 3 out of 4 of the mitred corners. I'm not exactly sure what went wrong. I can't even bear to show a picture. I'm sounding much less happy and more critical than I feel, it's just that, considering the effort that went in to it, I hoped to really really love it and I'm not sure that I do. It's the way of things though, isn't it? It's very unpredictable what will work and what won't. At least for me.
Posted by Julie