(warning  - unless you give a damn about quilting you'll probably want to skip this post)
Grace's quilt - the stash buster.
No new fabric, (aside from a half metre for binding) was bought.
I based the pattern on 'small frames' from Elizabeth Hartman's book 'The Practical Guide to Patchwork'. 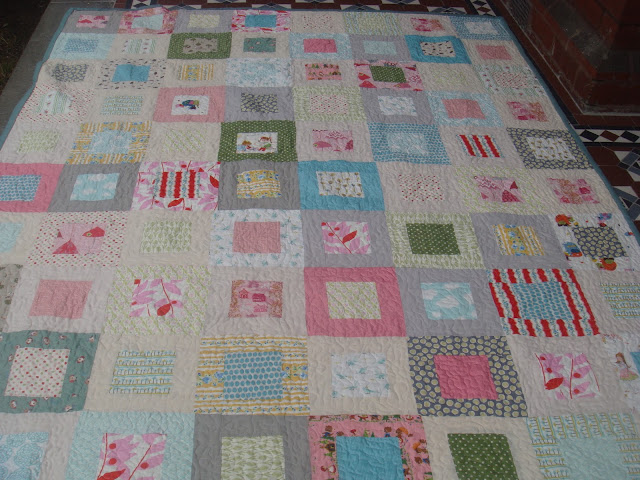 The pattern calls for alternate frames of solids and patterns, but, as I didn't have enough of any one solid in my stash I used the leftover linen from the girl's Christmas dresses, and a couple of other solid neutrals I had. Without the consistency of each alternate block being framed in the same fabric, the quilt loses a lot of the 'patterned' look, but I ended up pretty happy about this.
Grace is definitely the most girly of my girls - or perhaps it is just that she is four, and I've forgotten what four was like for the older two.  I wanted to reflect her personality, without making an unbearably fussy quilt.  I wanted it to look completely right on a four year old's bed, but also on a fourteen year old's.
I had a few special pieces of Japanese fabric I wanted to feature, and I also wanted to incorporate at least one of each of the fabrics I'd used in the other girls' quilts (Natalie gave me this idea when I started Lily's quilt).
I know some quilters have a picture in their mind before they start but I really have only a bit of a feel, a bit of an idea, and a hope that it will come together in the end.  I chose a group of fabrics that I thought would work together, including a few that seemed a bit out of place - like the red stripes in the blocks below.  I don't like things too matchy matchy.
Once I'd sewn the blocks I jigged them around quite a few times.  Digital cameras are great for this process - somehow a photo allows you to get a perspective.  Helpful friends with good eyes are also invaluable.  Thank you Daniela for showing me that I needed to 'anchor' the corners with strong blocks.  Once I'd done that, the rest fell into place.
And then.......

I was given my Bernina.  Have I mentioned my Bernina?  I love my Bernina.
A new world of quilting options was opened to me.  Previously it was straight lines and in-the-ditch.  The old Singer had no way to lower the feed-dogs (essential for free-motion quilting) and the Bernina not only came with that ability but a nifty little device called a 'BSR'.
The 'Bernina Stitch Regulator' regulates the length of the stitch whilst sewing free motion - keeping them pretty much the same, even when you are twisting and turning the fabric all over the place.

This means you can get really acceptable results even as a beginner.  Without a BSR I don't know that I'd attempt free motion quilting as my handling of the fabric under the machine is just not consistent enough.  I'd end up with a mess and because some of the aesthetic is in the actual quilting, you notice it more than in straight line quilting.
The quilting itself was quite a joy and that left only the binding.  One thing I have learned is that the binding can completely change a quilt.  Using pink binding on this quilt would have shifted the balance of colours and it would have become a pink quilt.  If I'd used a bright colour it would have picked up the brighter blocks and made them stand out much more, significantly changing the look of the quilt.
Again Daniela steered me in the right direction, identifying the colours in the quilt I needed to pick up with the binding.  Natalie, Cath and others confirmed blue binding over grey. 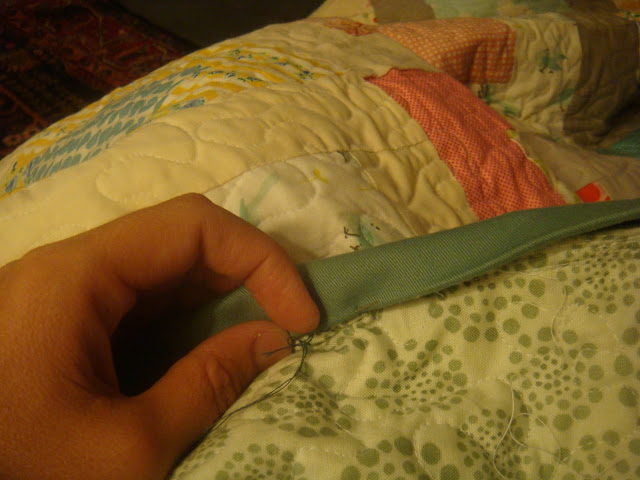 I'm generally not a great one for handstitching (or hand washing) but surprisingly I like stitching binding.  It takes less time than you expect, and you get to sit with the quilt over you whilst you do it which feels kind of olde worlde.
Many many blogs devote countless posts to the importance of mindfulness in life and parenting.  I'm never entirely sure what that actually means, but, when binding quilts, I think maybe I'm experiencing it anyway.

So finally, after weeks and months of Grace asking when her quilt would be done, it was.