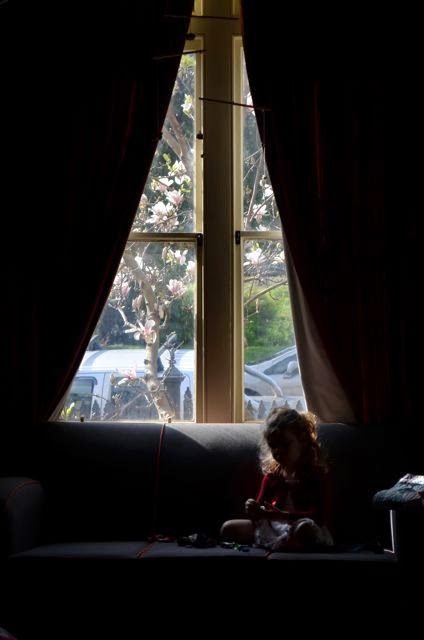 I was staying up late, stitching those little horses.  Something about the way they came together pleased me so much that, even yawning and I knowing that I'd be tired tomorrow, I kept going.  It amuses and annoys me that as I lie in bed, to all intents fast asleep, my children come in and ask me questions  - 'can I have porrige?'  'where is my skirt' - without so much as a preliminary 'Mama are you awake?'.  Of course I am awake, alerted by the click click of Winnie's claws on the parquetry to the need to get her outside before she wees on the floor or, her preferred option, the carpet.
Last Saturday we were bundling out the door to get to tap when we discovered that someone had parked in our lane, blocking our car in. We quickly check all the neighbours but none knew whose enormous ute it was.  We should ride our bikes anyway, it's just lack of organisation that sees us driving.  But I was unaccountably annoyed at the lack of consideration and my mind immediately filled with indignation.  What if it had been an emergency?  What if one of the kids had been ill?  Or had a sports game to get to in a not-riding-distance location?  The ride was good though, in the frosty sunshine, even if we were late.  I started 'Dinner and the Homesick Restaurant' and was remined how much I love Anne Tyler.  By the time we got home the ute was gone and my outrage had dissipated.  I ran some errands, and the kids ran though their endless play-argue-make-up loop.  I sewed cushion covers out of old jumpers and we went to the pub with friends and their kids for an early dinner. By 9.15 everyone was in bed and settled and I was free to stitch some more horses in front of 'Game of Thrones'.
On Sunday Craig took Nina off to soccer and Lily and Grace made a broomstick out of twigs collected in the garden.  For hours they played a game of witches while Ruby wrote her latest installment of 'Creative Mind'.  I pottered around with loads of washing and attempted tidying and vacuuming up the snips of yarn and fabric that the horses had shed all over the floor.   Even after a few hours it seemed that the house was still a state.  Housework always feels like a sisyphean task but I can never escape the idea that  'apres moi, le deluge'.  I know that my context is wrong, but it does seem that if I don't keep myself somewhere in the game, the tsunami of housework will drown us all.  Grace and Lily painted each other's faces and got into dress-ups.  Somewhere in there I read most of the paper and had a cup of tea and then my friend Bruce came over and Nina returned and Craig went to work.  I fried up mushrooms in garlic and Bruce and I had them with Meredith feta on Turkish bread while we discussed his plans to buy a house in Reservoir (which he appears incapable of pronouncing in the correct Reservore way) with his partner Nenad.  Grace and Lily wrote a recipe book and nagged and nagged and nagged me to be allowed to make their signature dish  - 'Chocolate milk with Sugar'.  I told them they could make it for afternoon tea provided there was no more nagging.  I took Nina to her friend's house so they could go boating on the river, and Grace and Lily continued to play and fight for hours until eventually they made their drink, which was so sweet that neither Ruby nor I could have more than a teaspoon.  Ruby tired of her story and decided to make some fudge, but we didn't have all the ingredients so she walked to the shops to get them and then laboured over the recipe for what seemed like hours.  I forgot, being now an efficient baker by necessity, how long cooking would take when I was a kid - certainly the better part of an afternoon.  Grace has been trying to climb a particular tree in our garden for months.  She's tried ropes and even attempted to put screws in the trunk to act as steps, to no avail.  The lowest branch is way too high.  I finally relented and got out the ladder so she and Lily could get to the lowest branch.  Lily was far less fearful than Grace and extremely chuffed that she climbed higher than Grace.   I'm not an anxious parent, but I kept seeing a broken arm or leg as one or both tumbled out of the tree.  Neither materialised.  Craig came home to watch the Dogs get thrashed by the Hawks and I collected Nina so she could watch a couple of quarters with her Dad.  She tries hard to be the footy-companion that he doesn't really have, but she could only manage till three-quarter time and then went out to play on the trampoline with Ruby.   Grace and Lily did some jigsaw puzzles, and played and fought.  At least twice Lily threw things or hit Grace and ended up in her room, yelling at me for being mean.  I made pumpkin soup and chilli beans and pasta and rice and everyone had something they liked for dinner. Then bath and stories - the second Mr Galliano's Circus book for the little girls, the second-to-last chapter of 'A Wrinkle in Time' for the big girls and that was the weekend.  A weekend of the usual nothing much and so much.