Nina and I had a rare day almost alone (Lily was there as well). She had been wanting to sew a mouse for ages modeled on these ones. She'd made the bed/box with her father and we'd managed to sew the mattress and pillow one evening, but the intricacies of the mouse needed time and concentration.
We were treated to a surprise visit from my niece, herself a keen little sewer, and my sister and I spent an astonishingly peaceful day with these two industrious cousins, ages 6 and 7, sewing their own projects side by side. 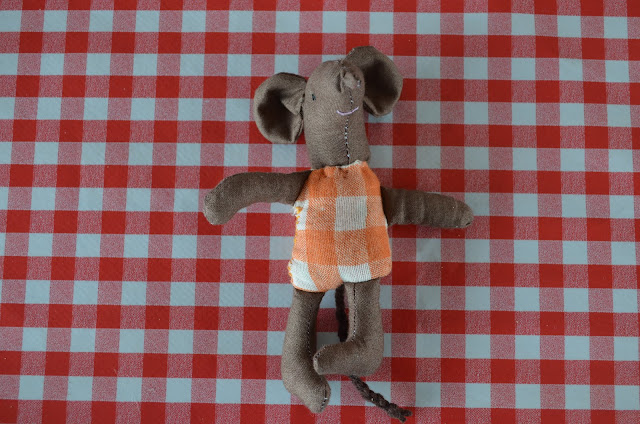 I'm sometimes asked about the children and sewing machines - how much do I let them do themselves, and how dangerous it is?

I'm neither an expert on sewing or children, but here is what I've done.

From about three or four they sometimes sit on my lap when I sew and 'help' guide the Fabric. When they can reach the pedal they sometimes operate the pedal themselves while I guide the material. Nina is an able girl and keen to do things herself, and she can use the machine by herself adequately on simple projects. She has sewn little bags and pillows entirely on her own and slightly more complicated things like pillow cases and a simple skirt on her own but with me standing close. For something even more complicated (i.e anything small or that involves curves) I'll help guide the fabric, and tell her when to stop and lift the presser foot to move the position and so on.

From experience with my own kids as well as various friends and relatives, I reckon from about 6, most children can sew reasonably straight lines without danger. We've never had an injury on the sewing machine and only a few finger pricks on pins. 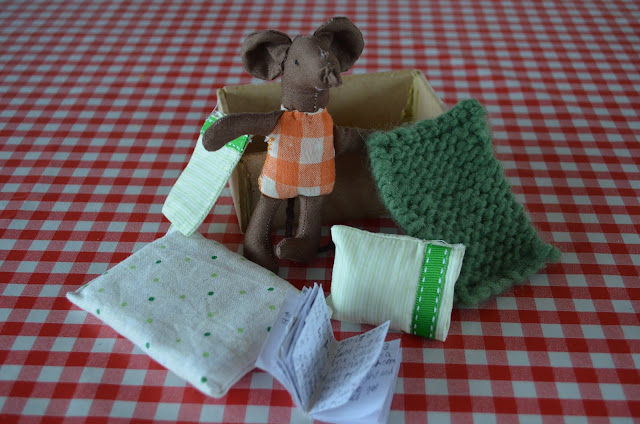 With this project, Nina sewed the mattress, pillow and pillowcase by herself (I sewed the spare pillowcase), but with me standing close giving directions (quite explicit directions - "stop now, two more stitches, slowly here" etc). She sewed the head and limbs but I drew a line to indicate where she should sew and helped guide the fabric as these were very small pieces. I sewed the torso - this was very tricky with the arms and legs inside, and even then we had to whipstitch the side. She is good at whipstitch. I did most of the bagging out of the limbs as they were so small and we stuffed an arm and a leg each. I attached the ears to the head as these were a bit difficult, and started her off attaching the head to the body, but she finished it. The main difficulty I've found kids have with handstitching is getting the hang of pulling the needle through the fabric without pulling the thread out of the needle. Nina has done a fair bit of handstitching now and has mastered this problem, which saves me a lot of re-threading. She plaited his tail and I stitched it on.

I started her off with the face embroidery, but she did the rest. And she knitted the little blanket entirely on her own, apart from help casting on and off. I've found that most children can manage knitting needles competently at about 6 or 7. I'm sure there are some younger prodigies out there, but 6-7 seems to be when a lot of kids 'get it'. So far we've stuck to garter stitch and nothing complicated like increases or decreases.

I'd consider this to be more of a joint project than something that Nina had made herself. But she certainly did lots of it and was very thrilled with the results. 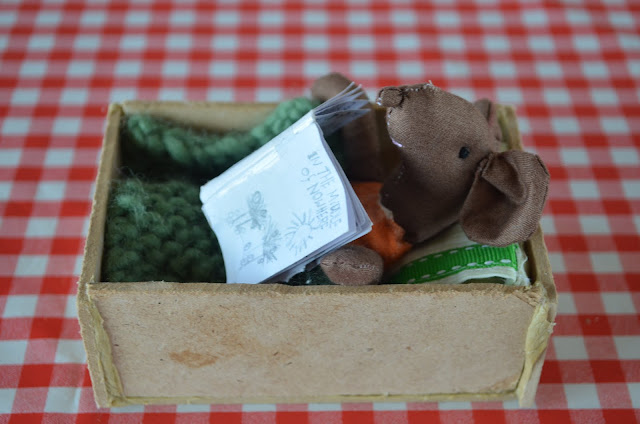 She wrote her mouse a tiny chapter book called "The Middle of Nowhere" about a cat called Mincey who goes wandering and gets lost.

Grace came home from her kinder having learned a new song about Mousey Brown, which was fitting and has become this little fellow's name.

(I've just been told that the box is not finished and that the rough edges will be sanded and painted, but the likelihood that I'll get round to taking more photographs of it is slim, so I'm gonna post this anyway.)
Posted by Julie