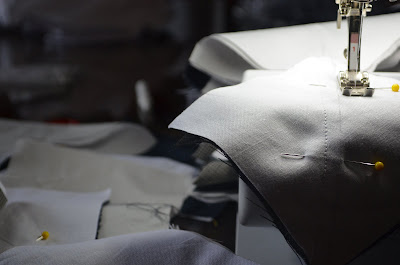 Warning - this is a longish post about quilting with no finished quilt at the end.

I've been germinating an idea for my next quilt for a while. I wanted to use triangles, I wanted it to be grey and orange and I wanted it to be lap-quilt size. Because I am not a precise quilter I worried about the triangles until I came across this tutorial for chain piecing which made them seem doable, as indeed they were. 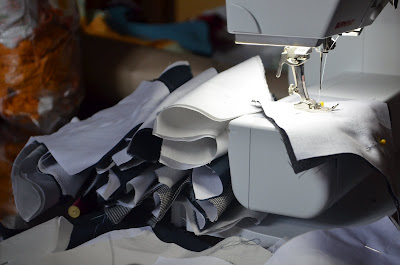 The light in my sewing room makes for lovely photos, but not always great sewing. Still, 99% of my sewing is done at night so it makes little real difference.

I originally planned a flock of geese design. Then I was interested in this quilt design and liked the randomness of the placement of triangles. But I didn't want to buy any fabric as I have such a large existing stash, which is constantly being added to by used and worn out shirts and suits (there is only so much demand for smocks).  This quilt has been made entirely from old suits, skirts, shirts, old doona covers, and scraps from other projects.  Even the batting has been pieced together from left-overs. 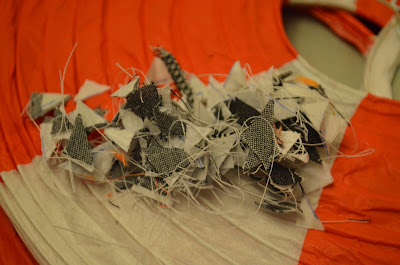 I leapt in and started making the triangles. I like the flexibility of this approach, but there are downsides. For example, I had not decided whether I would have alternating rows of orange and grey, so I made nearly equal numbers of each colour. But when I started laying them out, I found that I much preferred a mostly grey quilt with a few splashes of orange. So I have a lot of excess orange blocks. Some time there will be another project using up those orange and white squares.

It also meant that I discovered 38 grey triangles I'd forgotten about after I had already pieced the blocks together.  So perhaps a whole other quilt might be called for..... 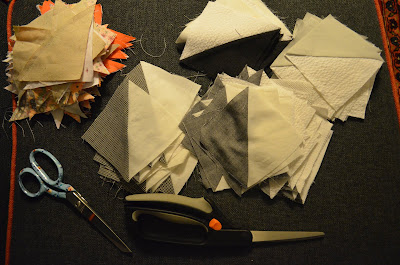 This is where digital photography is a huge boon. I can't always see the spots that are 'wrong' - concentrations of colour, areas lacking. Photography gives a global view. I take lots of not very great photos from all angles and with the blocks in various combinations. With the block I had made, the random placement didn't really work, so I went with this design. These are photos taken after I'd figured out the basic structure and was playing with block order. 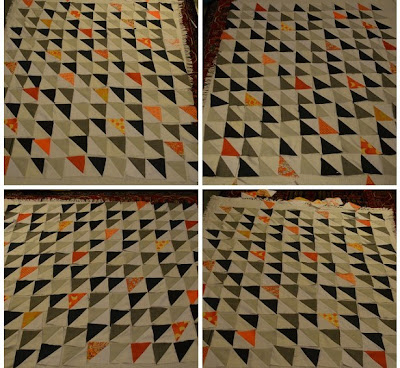 I thought I had identified the row order and marked them appropriately but that didn't stop me from stitching two rows together the wrong way. I loath unpicking. 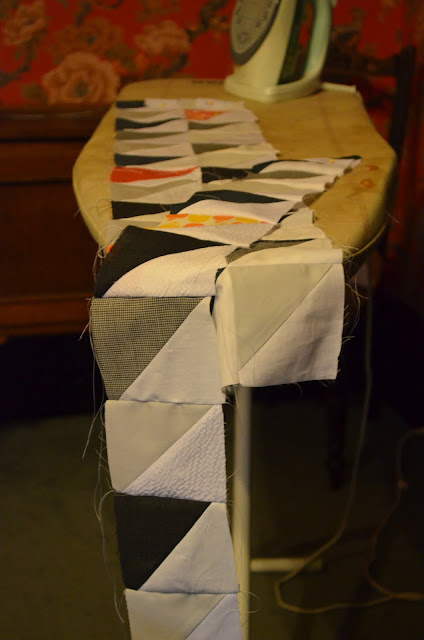 It has been a slow process, this quilt, which is not the way I usually work. Finally I got to the quilting and then, part-way through, I ran out of thread. I'm only using a plain white cotton, surely I always keep a few large spools handy? Apparently not. This is not the first time it has happened to me either. God knows when I'll get to the shop to buy more, so I now have to patiently bide my time until the weekend at least. 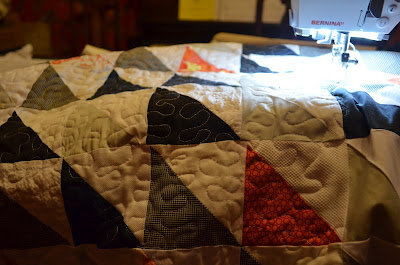 I'm quilting the girls names into this - corny I know, but they'll get a kick out of it. And I did a partly patchwork back (had to use some of those left over squares) which I have never been a real fan of, but I like this. I can't show it yet as it is all carefully rolled up and I didn't take any pre-quilting photos. So, to be continued...
Posted by Julie