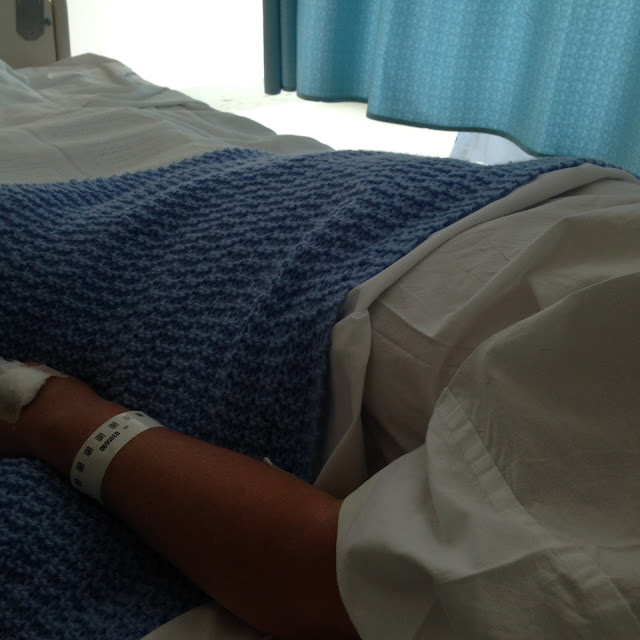 Just before Christmas 2014 one of my sisters was diagnosed with liver cancer.  On Instagram I had seen the Moda Modern Building Blocks quilt and had ordered a kit as soon as it became available.   I'd never done that before - never made a quilt from a pattern or with a specific set of fabrics, but this one appealed to me so much, just as it was and I couldn't imagine my own combination of fabrics could ever be as joyous and delightful as the ones it was designed with.
Between Christmas and early January we had some very anxious days waiting for my sister to undergo surgery.  Scans had shown a large tumour on her liver and a second smaller 'something' also on the liver.  Biopsy of the second 'something' was impossible due to its location.  So the plan was this - she wold go into surgery.  the surgeon would examine and biopsy the smaller 'something'. If it was cancer, he would close her up and proceed no further, because that would mean that the cancer had already spread.  'Treatment' at that point, would be palliative only.  If, however, the 'something' was nothing - benign, an artefact, whatever, he would remove about a third of her liver in a  very major operation and she would then commence six months of chemotherapy.
Because it was Christmas the surgeon and various members of his preferred team were on leave and we had to wait till early January for them to assemble and undertake the procedure.
Primary liver cancer is very rare, and googling 'liver cancer' is not encouraging.  The prognosis is generally poor.  A young colleague of mine, mother of two, had died the previous year from this exact same cancer.  I was not feeling optimistic.
While we waited for the surgery date to arrive, I worked on this quilt and listened to 'Serial', the podcast.  I didn't say to myself that I was making the quilt for her.  I knew that this quilt would take me a very long time and, if the first of the possible scenarios developed, she would not have a long time.  But in the back of my mind I thought to myself what a lovely life affirming quilt this was, and, if life was affirmed, what a nice gift it might make.
My sister went into hospital for the operation and we were in the bizarre position of hoping that the surgery would take a very long time and not a very short time.
And indeed, the second 'tumour' was benign and the operation was a success.
The first few blocks of this quilt are huge.  Early progress is easy - after about half a dozen blocks, the quilt, in size at least, in about half done.  Then come all the tiny fiddly blocks.
Chemo, they say, has a cumulative effect.  At first it seems not too bad, but each session takes a greater and greater toll.
As the months of chemo wore on for my sister, I worked on this quilt.  The blocks were very difficult for me - lacking the sort of precision and attention to detail necessary for such a project.  The cutting was also incredibly time consuming - lots of very odd measurements 5 and 3/8ths of an inch by 3 and 5/12ths of an inch = things like that.  I had to make cardboard templates for the pieces and none of the pieces was exactly the same as any of the other pieces.  Endlessly frustrating.
My blocks are skewiff, there is not a single perfect point in this quilt and all seams are wonky.  But I totally love it.
Mid year my sister finished chemo and I finished the quilt top.  It took another few months for her to recover her stamina and for the fatigue to lift.  It took another few months for me to get around to basting and quilting this thing.  It's the first queen sized quilt I've ever done and I wasn't sure how I'd go on my home machine, but it worked fine.  Given the complexity of the pattern and the riot of colours, I just went with straight line quilting and I think it looks right.
At Christmas my sister was pronounced 'cancer free'.  I gave her the quilt. 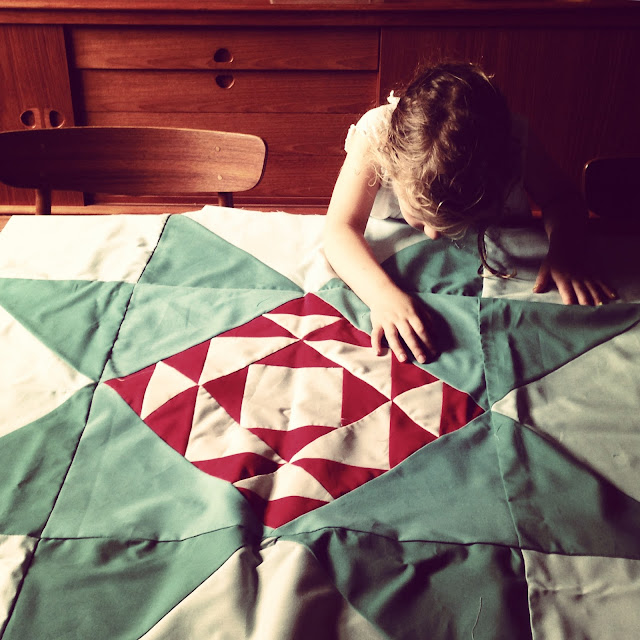 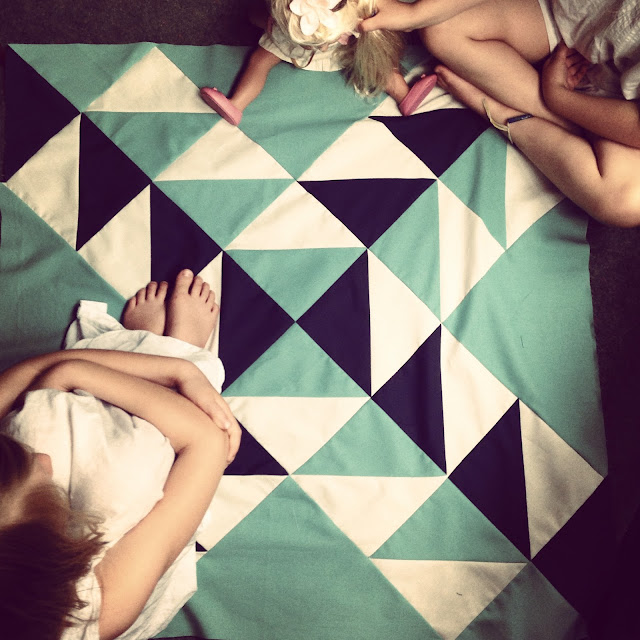 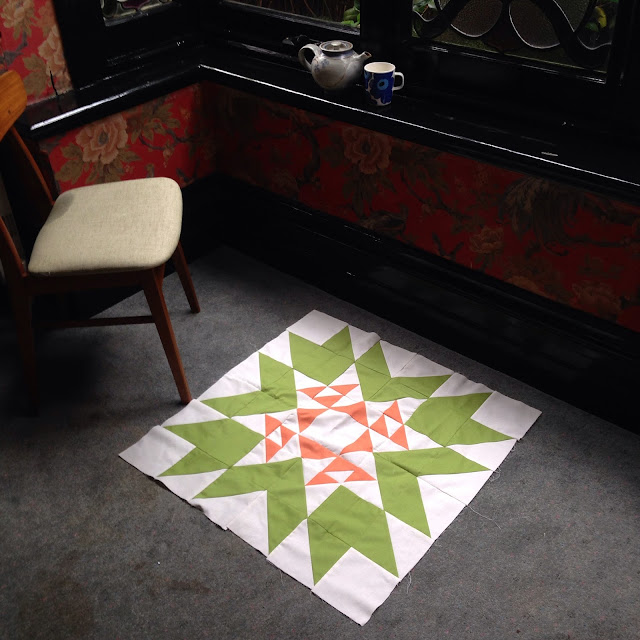 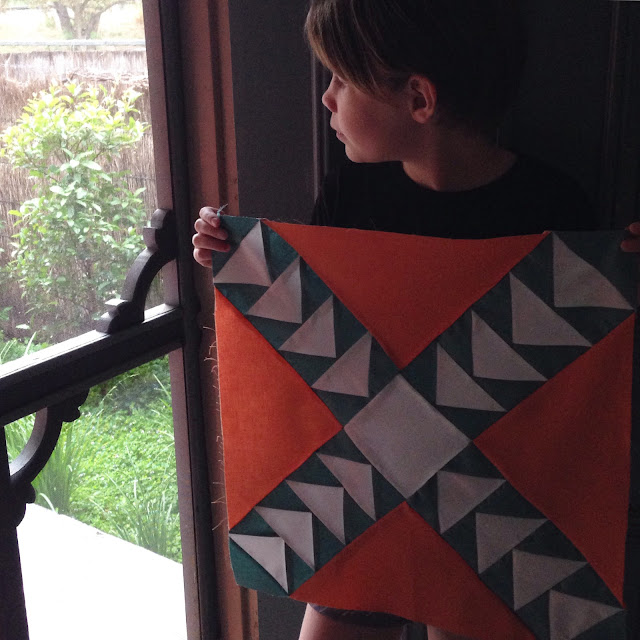 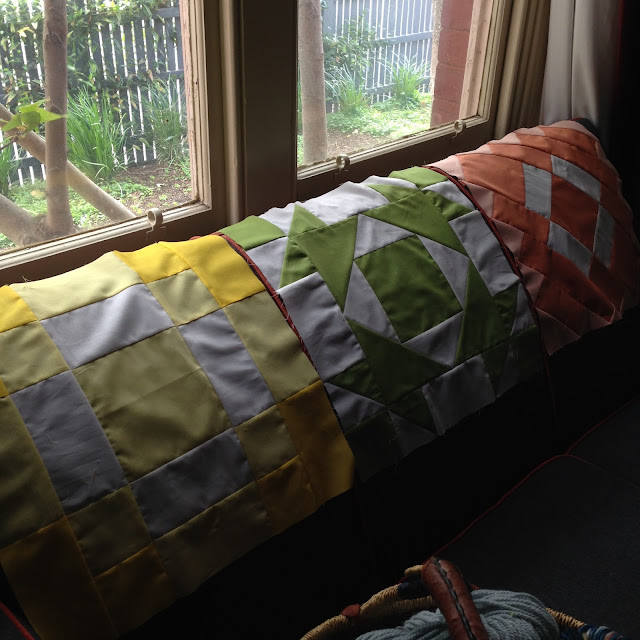 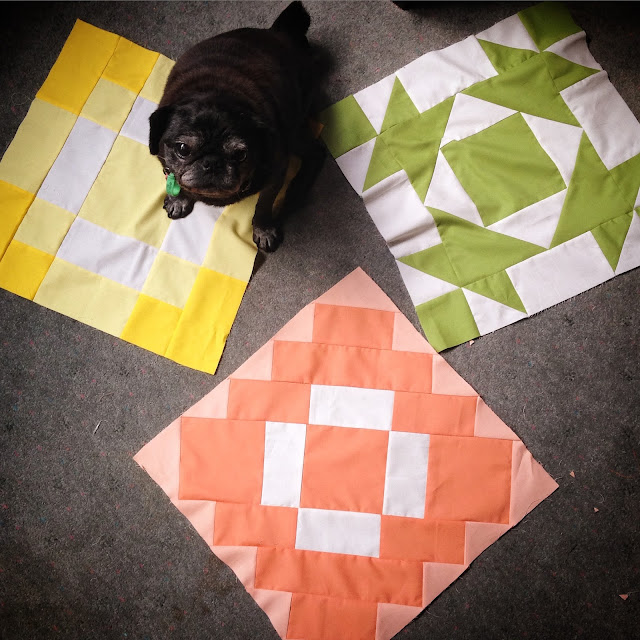 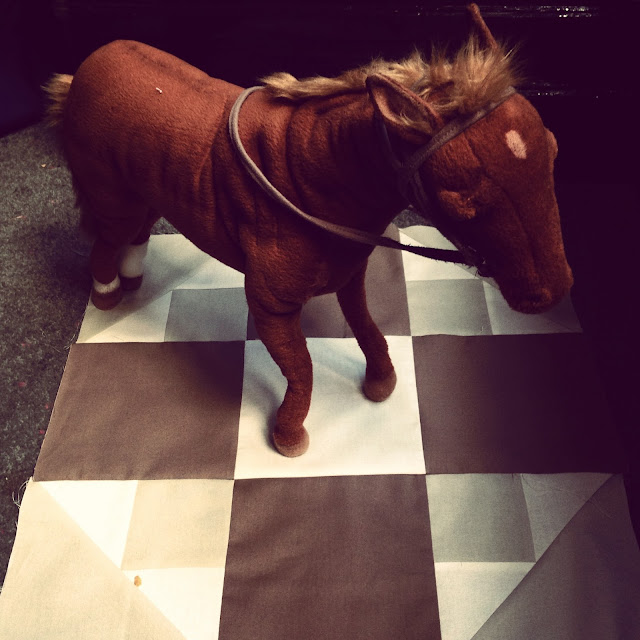 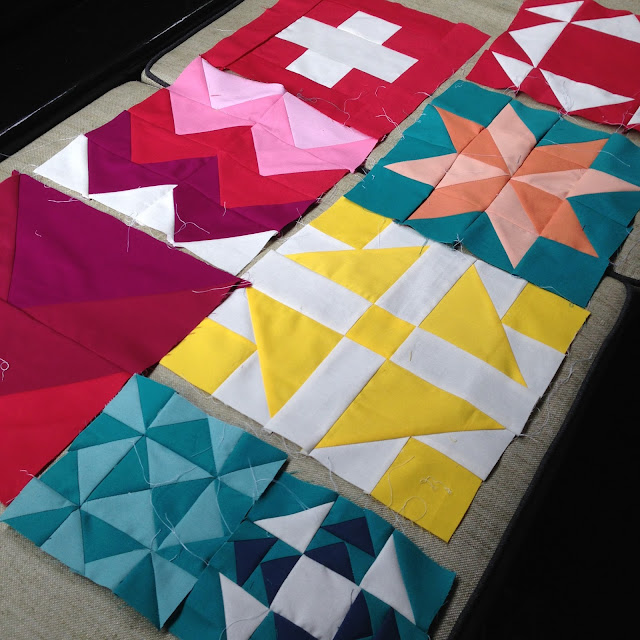 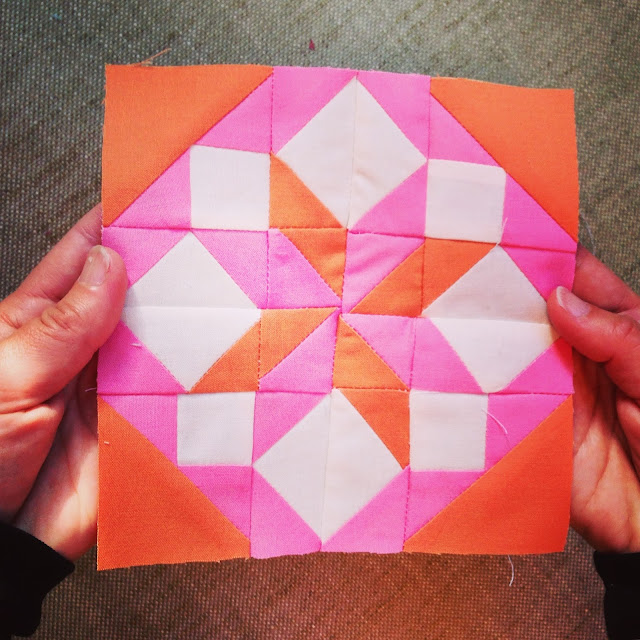 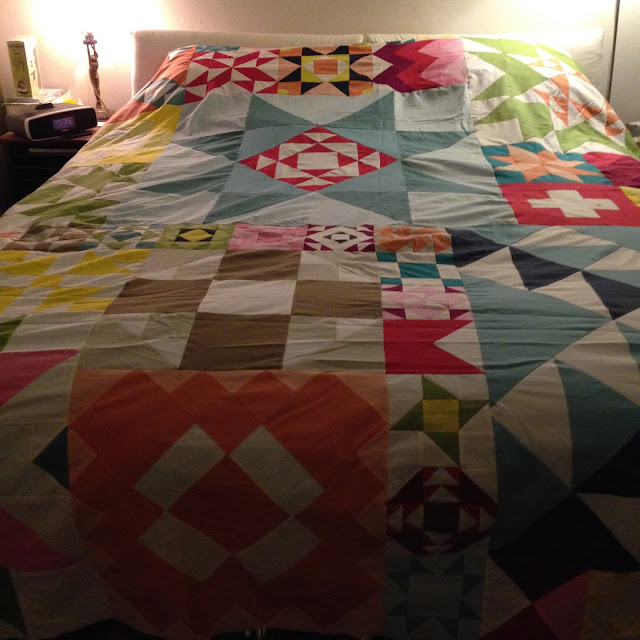 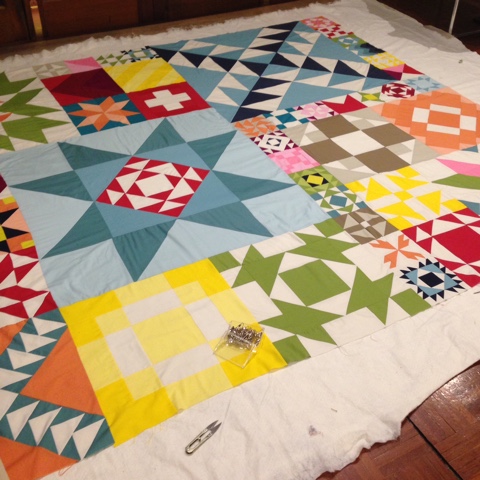 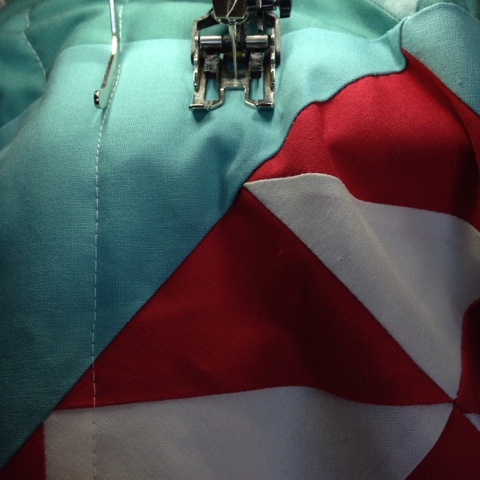 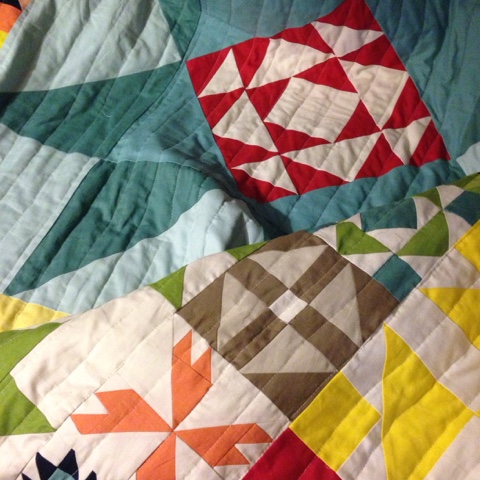 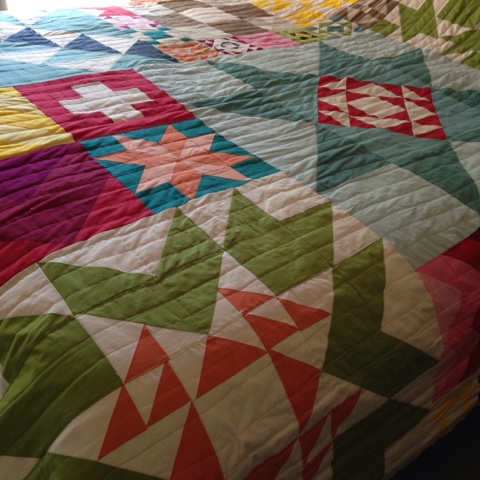