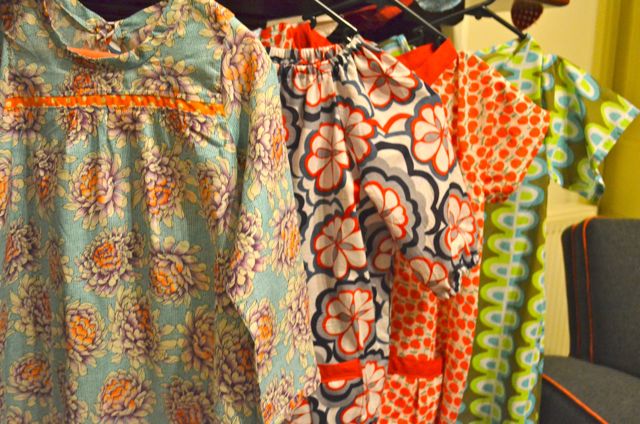 I finished all four dresses, and though they were a very rushed job, and it shows, they have been by far the most successful in terms of being worn. Lily, who one could politely term a fickle dresser, loves hers (it's the front one in the photo above) and literally wore it every day we were away, and sometimes at night too. Luckily it is a very light Japanese lawn which dries in minutes so I could actually wash it occasionally. She chose her fabric and also requested that it be long sleeved, which makes it a perfect light cover in Summer. Her friend Gully asked her why she always wore the same top, to which she scathingly replied that it was a dress, though it is rather short.

Grace also chose her fabric and decided on details like that she wanted pockets and elastic at the sleeves. I gave up trying to keep the dresses a surprise  I really love this fabric and was pleasantly surprised that she chose it.  I don't always have luck letting the kids choose their own material.

One issue I have had with Grace's dress is that because the fabric is so thin, it has ripped where the pocket attaches, presumably from her putting her hands in the pocket and putting strain on the seam.  The seam held but the fabric tore.  Any suggestions for avoiding this?  Is there some sort of reinforcement I should be using?  It hasn't happened with Nina's which has very similar pockets.

All the dresses are a very light japanese lawn and all from Spotlight apart from Nina's apples which was from Rathdowne Remnants.

I didn't have patterns for any of the dresses and basically copied dresses they already have that still fit and modified them all somewhat.  They really are not very polished pieces (although I did do French seams given how light the fabric was) but I do feel that I am getting the hang of how garments are put together, even in my very rough fashion.  They all actually look quite a bit better on than they do on the hanger.  Grace's and Nina's especially are a smock-like style which doesn't hang well. 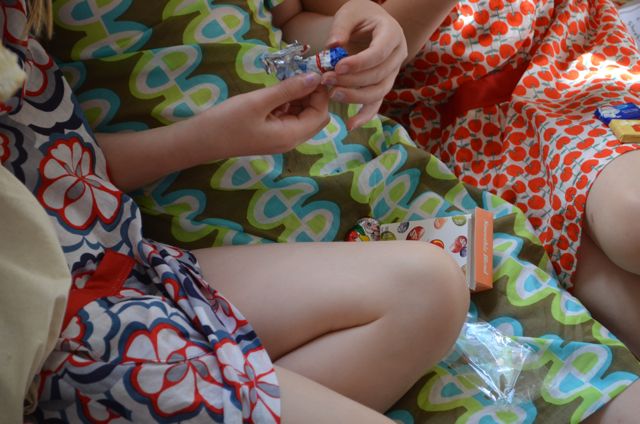 And, even if they are less than perfect, they are worn and appreciated, which is so much more satisfying than making something than no one will put on.