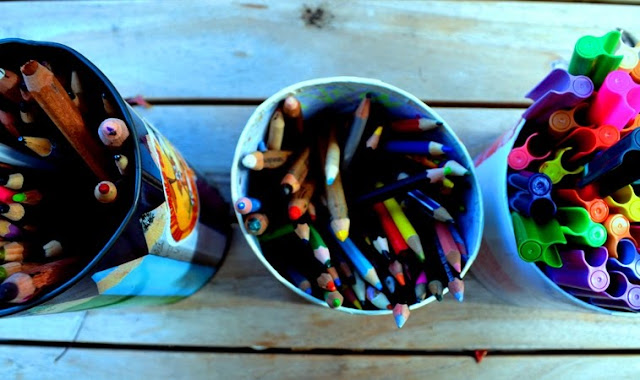 I've been reading and Ruby is hovering over her footy-watching Daddy, wanting the game to be over. Well, it's already over, Dogs 79, Swans 137, just not yet finished. 'Our team is such a let down' says Ruby. 'But you wont let us change teams' adds Nina. 'You're not changing teams, no' says Craig, mildly. Ruby says 'Because we are not let downs, even though they are'.  Footy loyalty at nine, it's as important as anything else a Melbournian has to learn.  Nina and Grace are at my feet playing lego. Where is Lily we all wonder. I call out 'Lily, Lily'. The house is getting dark. She's down the other end, behind a chair by the window. 'Don't come in' she tells me, 'I'm playing a game'.  She fell asleep on the couch earlier.  It's the only way she naps now and it's a mixed blessing.  It puts her in a grand mood for the afternoon, but makes bed time later and harder.  The three older girls each had a friend over for a play.  Ruby and Nina sewed zippered purses with their friends, with a lot of help from me.  I don't want to set the expectation that a play at our place involves leaving with a cool hand made item, so I'll lower the bar next time.  Besides which, I like having kids over so I don't have to entertain everyone. Grace and her friend Csilla decided to get married and have a baby together. 'Ahh' said Ruby noncholantly, 'they're playing lesbians'.  Lily has just joined us. 'Can I play with you guys?' she asks Nina and Grace, 'say yes, say yes, say yes'.  They say yes.  The footy has finished.  The lego is being packed up.  Craig is making chicken and corn soup.  Ruby finally has control of the remote.  Winnie thinks it's about dinner time and is wagging her tail to let me know.  I've got a tidy sewing room and a messy house.  Another week ending, another week starting.
Posted by Julie