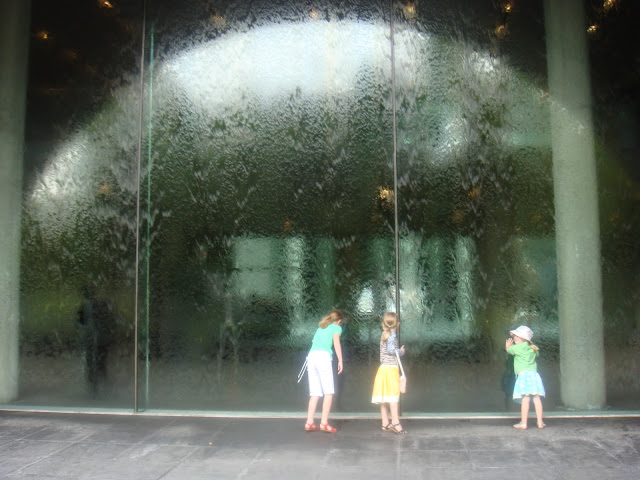 When I was a child, the pools out the front of the NGV contained no fountains or sculptures and on hot days we would sometimes paddle in them.   My children think this is hilarious and wish they could too, not least to gather the coins on the bottom that people throw in.
Even without full-body immersion, the waterwall is pretty fabulous, all on its own.  It delights me still. 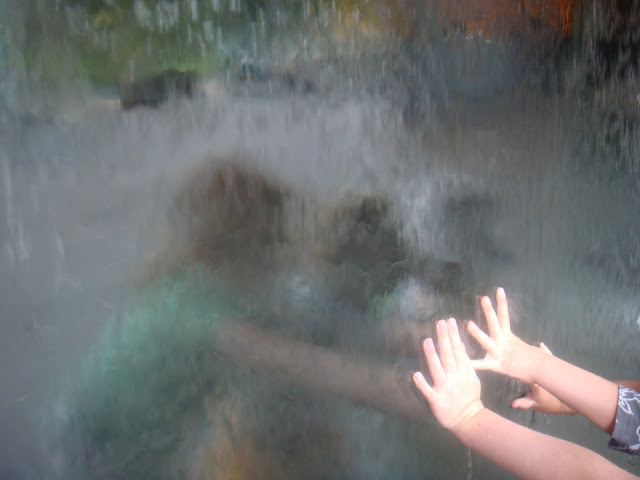 Recently we saw an exhibition called "unnerved" by a group of Kiwi artists.  Our first sight was this unnervingly large rabbit. 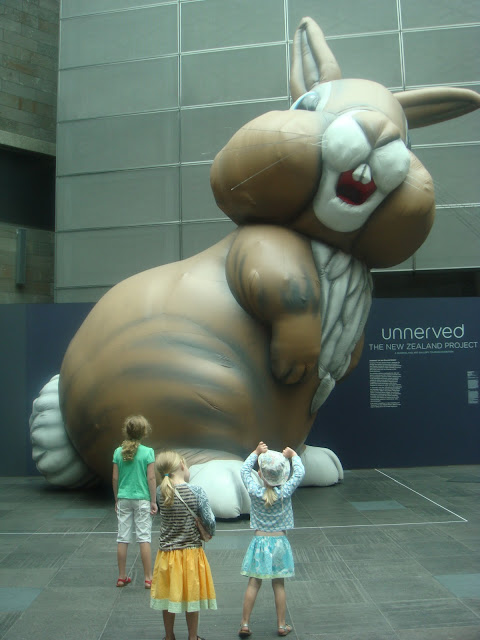 There were disturbing but not (to my mind) scary images, including some hypercolourised views of a small girl's mouth which were weird and oddly beautiful.  The most compelling exhibit for the kids was a video called "Brothers Chewing" which showed 2 young men on screen, one chewing for a period, then taking the chewy out of his mouth and passing it to the other young man who then started chewing.  This was accompanied by head phones that allowed you to hear the sounds of the chewing.  After a while looking at it and some of the other exhibits the kids were so unnerved that they were pretty much begging to leave. An aptly named exhibition.

It's so lovely taking the kids to the gallery, kind of like eating healthy food that you actually like. I like that the staff are so welcoming to the kids.  We had a near-incident where a small hand may have touched the gold frame of a small Giotto painting, which may have induced a near heart attack in me.  The attendant was so cool - 'no harm done' - and non-reprimanding of me. Acted much better than me as I couldn't help but (re)give the 5 minute lecture about n.o.t. t.o.u.c.h.i.n.g.  It's easy for people in those situations to politely/sternly ask you to 'please control your child ma'am' or directly tell the child off - a sure fire way to induce a melt down in my experience.  And they would be justified in doing it, which makes me all the more appreciative when they don't.